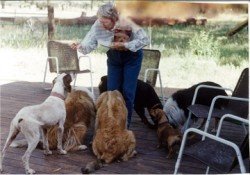 Bazy Tankersley with her beloved dogs.

The Ruth M. Tankersley Trust has awarded the Humane Society of Southern Arizona (HSSA) – an Alexander | Carrillo Consulting client – a leadership gift of $1 million in memory of Ruth M. “Bazy” Tankersley and her daughter, Tiffany Tankersley, both of whom passed away in the past two years.

This generous gift is critical to the principal gifts phase of the HSSA’s effort to build a new facility to help pets and the people who love them. The Intake Center on the new campus, where pets in need are welcomed into care, will be called “The Bazy and Tiffany Tankersley Welcome Center” in their honor.  The campaign is managed by Laura Alexander of Alexander | Carrillo Consulting.

“Tiffany and Bazy were both dedicated supporters of the Tucson Community,” says Hanna Miller, Bazy’s granddaughter. “The HSSA positively impacts hundreds of thousands of lives, both two- and four-legged, through its community programs – Pet Visitation and Community Education, the Animal Cruelty Task Force and Inmate Integration, just to name a few. That’s something I know my Aunt and Grandmother would be thrilled to support.”

Bazy Tankersley was best known as owner of Al-Marah Arabians. She was devoted to her horses, and was one of the most prolific Arabian horse breeders in the country, with more than 2,800 foals registered.

“Bazy was known for her love of horses, but she loved her dogs just as much,” says her son, Mark Miller. “I know she would be proud of the trustees for making this decision to fund the Humane Society of Southern Arizona.”

“Both Bazy and Tiffany always had a menagerie of pets – dogs, cats, birds, horses, cows, even orphaned raccoons … All creatures great and small were beloved. Beginning in my childhood it was clear to me that the animals were a part of the family, and that a house couldn’t be a home without them,” says Hanna Miller.

Bazy and Tiffany were also recognized for their philanthropy and volunteerism. Bazy founded St. Gregory College Preparatory School, served as president of the Arizona Sonora Desert Museum, contributed to the founding of Therapeutic Riding of Tucson (TROT), and supported the Tucson Audubon Society. She received an honorary Doctor of Humane Letters from the University of Arizona in 2004 in recognition of her contributions.

“The generosity of this incredible gift from the Tankersley Trust has inspired us all,” says Humane Society of Southern Arizona CEO, Maureen O’Nell.  “It is an honor to pay tribute to Bazy and Tiffany, and their love for animals, at the new facility.”

The HSSA’s $10 million capital campaign will be announced to the public in a few months. If you would like to be part of this historic effort, contact Hilary Van Alsburg at 520.321.3704, Ext 117.